This post was authored by Salvatore M. Capizzi, Dunham's Chief Sales & Marketing Officer. If you have questions concerning today's topic, please call us at (858) 964 - 0500. Hold us to higher standards.

Around the world, the norm of most societies is taking care of their elders. We practice love, honor, gratitude, and respect for those who guided and took care of us in our youth.

The United States has augmented family care of elders with legislation designed to build social and financial support for them when they retire.

While this legislation has generally succeeded in producing the contemplated support, it has also created a tax challenge for retirees and those slated to inherit retirement accounts.

Let us explore these issues and possible solutions.

The History of Legislation for Retirees

The implementation of the practice of care for retirees began with the social security program enacted in 1934. This social insurance approach combines a tax on our earnings mingled with the same tax levied on other wage earners. Accumulated in the Social Security Trust Fund, its purpose is to pay an “old-age annuity” to those who live long enough to need it.

The same concept was enacted in 1965 through Medicare to take care of the medical needs of retirees.

Perhaps the landmark legislation for retirement income was when Congress passed the Revenue Act of 1978. This revenue act added section 401(K) to the Internal Revenue Code, enabling employees to build large amounts of tax-deferred retirement income with pre-taxed dollars.

Other notable dates include establishing the Roth IRA through the Taxpayer Relief Act of 1997 and the passage of the SECURE Act in 2019, which expanded benefits for retirees but created a disadvantage for most non-spousal beneficiaries inheriting IRAs.

Generally, these programs have worked well for what they intended to accomplish. 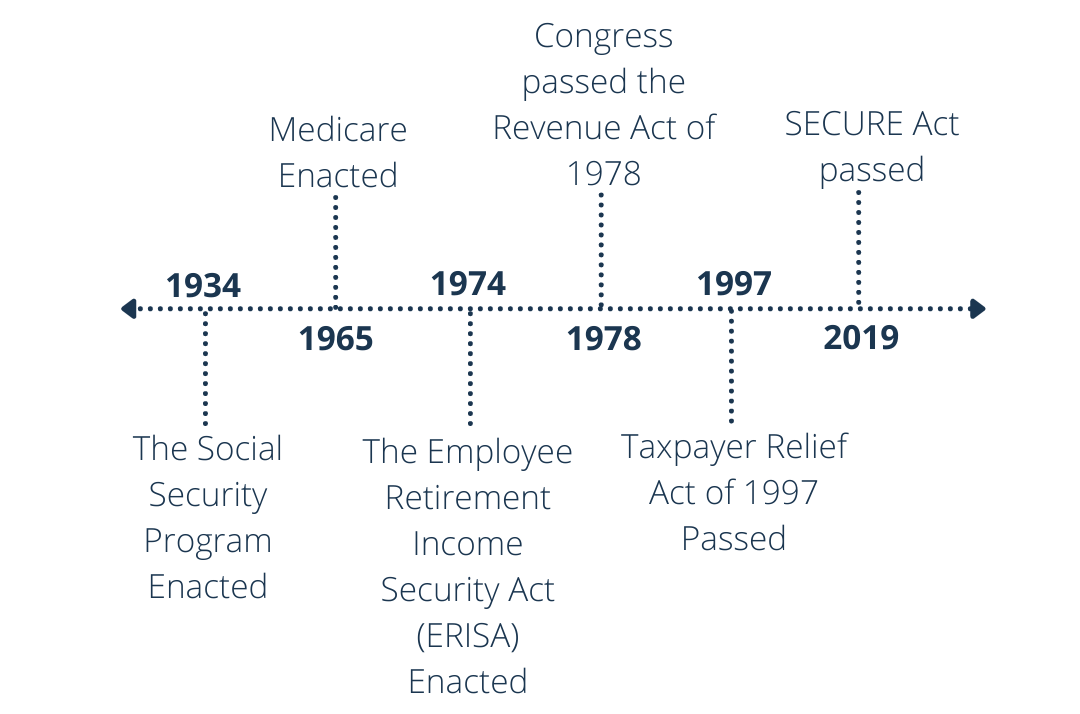 The Average Wealth of American Retirees

According to a report by the online investing company United Income, one out of every six retired Americans is a millionaire. They arrived at this statistic by analyzing data from multiple sources, including the Federal Reserve Board and the US Bureau of Labor Statistics. (1)

The United Income findings are supported when examining Fidelity Investments as a microcosm of the retirement marketplace. Fidelity reported that the number of Fidelity 401(k) plan participants and IRA owners with a balance of $1 million or more jumped to a high of 672,600 in the first quarter of 2021. The number of IRA millionaires increased to 307,600, and 401(K) millionaires jumped to 365,000. (2)

Despite how wonderfully these retirement plans have blossomed, as the saying goes, "every rose has its thorn."

An RMD is an amount the IRA owner must withdraw from their retirement plans when they attain age 72. This income works well if the IRA owner wants the income but may create a tax issue if they are not needed.

The thorn is: RMDs are taxed as ordinary income and may push the IRA owner into a higher tax bracket, increase their social security tax, increase their Medicare tax, and push them into the 3.8% tax on unearned income.

2. Heavy taxation for most non-spousal beneficiaries of IRAs

What is inherited by an IRA owner's non-spousal beneficiary is hampered because the ordinary income tax must be paid by the beneficiary. This particular thorn must be paid no later than the 10th year after the IRA owner dies.

Luckily, there are ways of mitigating these taxes. What makes it even more meaningful is that they can be wrapped together with the IRA owner’s charitable giving.

Tax strategies for an IRA that folds into an IRA owner’s charitable intent include Qualified Charitable Distributions (QCD), QCDs used in conjunction with donor-advised funds in a strategy known as bunching, and Charitable Leads Trusts to name a few.

An IRA owner’s non-spousal beneficiaries can completely eliminate the potentially heavy tax levied no later than the end of the tenth year of the IRA owner’s death through the use of a charitable remainder trust. This trust will provide significantly more lifetime income for the IRA owner’s beneficiaries, a tax deduction for their estate, and a gift for a charity.

Planning for Multiple Generations with the DTC IRA Trust Trilogy®

With the DTC IRA Trust Trilogy®, retirees who are IRA owners and their beneficiaries can learn how to replace assets lost to taxation, donated to charity, or placed in a donor advised fund. You will also learn how to establish guardrails for a beneficiary affected by substance abuse, prevent the accidental disinheriting of your children, maintain benefits for a child with special needs, and more.

If you would like to receive more information about how you may benefit from utilizing the Dunham Trust Company Trust Trilogy®, contact us today. We look forward to talking with you soon.

The Fundamentals of Email Marketing for Financial Advisors

As a financial advisor, you likely have a list of prospects that you are hoping to convert into clients. This is where email marketing may prove to...

Anatomy of a Depression vs. a Recession

During the Financial Crisis of 2008, the running joke in the media was that the difference between a recession and a depression is that when your c...

The Stock Market Crash of 1987

Imagine finding out that today, the S&P 500 lost -20.47%. How would you react? Would you hold firm with your investment, or would you employ what w...

Why You Should Incorporate More Video Marketing in 2022

Video content is not just nice to have anymore - it's now the way audiences expect to engage with you. If you haven't yet incorporated video into y...